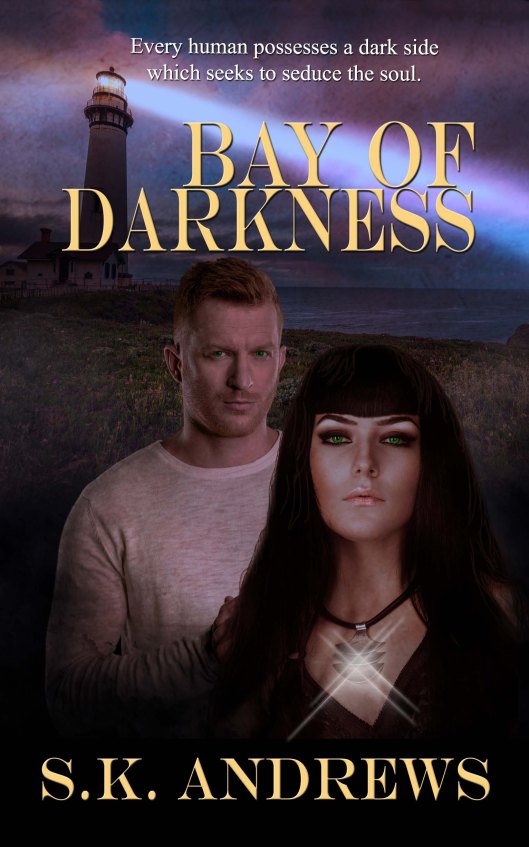 I’m excited to have a sister Rose (published by The Wild Rose Press) here today.  Please welcome S. K. Andrews, whose paranormal book, Bay of Darkness, was released yesterday!  Let’s see what she has to say…

At what age did you write your first story?

Around eight or nine.  In elementary school, we had to write a story.  So, I wrote about a mouse who ate ice cream, and ate so much he got bigger.  I put my thumb on a black ink pad to make the mouse (early illustrations) and as I kept writing the story, my thumb got lazier.  Hence, the bit about the mouse getting fat by the end!

I love it!  Which genre was the first to hook you?

Fantasy.  My sisters and I would read Grimm’s Fairy Tales, which got us scared and fascinated at the same time.

What was your first published book?

The Pursuit of Acting; Working Actors Share Their Experience and Advice, published by Praeger, and of course, it’s a non-fiction read designed to help student actors.

My favorite part of writing is the writing itself, especially after I’ve seen the scene in my head like a movie.  I also enjoy researching origins of items, or places that I incorporate into my paranormal stories.  It’s exciting to discover historical facts and/or mythological beings.

Yes, history and mythology are fascinating!  What are you working on now?

A novella that comes right after Bay of Darkness called, A Kelly Society Christmas.  It is another supernatural dilemma that Vivien Kelly and her paranormal investigative team find themselves in, but it is done with humor.  Vivien only has three days to do all her Christmas shopping, because she was busy saving the modern world from eternal darkness.  So, even though she must help a friend from being dragged to hell, she still needs to get her holiday shopping done, or she won’t have any presents under the tree on Christmas morning.  That would truly be a tragedy!

It sure would!  Of all the settings you’ve used (or created!) for your books, which is your favorite and why?

It’s tied between two—Half Moon Bay, California, USA & Clonakilty, Ireland.  Both of these locations are beach cities and have their own unique creative magic.

I use Irish settings in my young adult series, so Ireland’s magic resonates with me, too.  Have you ever dreamed about a character you created?

No, but after I wrote in Neal Harrington (Vivien Kelly’s soulmate in Bay of Darkness) I saw a man in line at Starbucks two days later that looked (and dressed) just like my character!  It was kind of freaky!

That’s awesome, and perhaps meant to be!  If you could have a conversation with anyone—dead or alive—who would it be?

If you could travel to any time and place, when and where would that be?

Well, I’m going to stay in 2019 because I love air-conditioning, but I would like to spend time in Paris, just discovering the city.  Preferably in April—April in Paris!

If you could step inside any book or series and live there for a week, which would you choose?

I would live for one week in a book called Wrapped Up In You.  It’s a romantic story in which the daughter of Santa Claus falls in love at the North Pole right before Christmas.  I’d play in the snow, become a guest at her wedding, and eat cookies in Santa’s Workshop!

If a fairy godmother appeared and offered you one thing—anything at all—what would you request?

My own brownstone on the Upper West Side in New York City.

It’s time to learn some of your favorites!

Foreign language (whether or not you speak it!): Italian

Song: “Once Upon a December” from Anastasia, the animated musical

Book: Zen in The Martial Arts by Joe Hyams

And finally, list your preference from the following choices:

A mortal, vampire, ghost, or fae for a lover? Mortal

Thanks so much for joining me today.  Best of luck with the book!  Now, here’s the scoop on Bay of Darkness:

After witnessing her fiancé’s murder and almost dying herself, Vivien Kelly’s mission is to destroy Dagda—a Celtic God turned demon. As a supernatural dark cloud looms over the Sahara, she finds herself drawn to the Northern California town of Half Moon Bay and a new life as a paranormal cleanser. There Vivien finds Dagda’s creatures tormenting the locals. Her own paranormal cleansing team—The Kelly Society— is born, and the race is on when people around her begin to die.

While banishing a banshee, Vivien meets Neal Harrington—a soul partner who can promise true happiness. But when Dagda’s black vapor creates a New World of darkness, her time is up. Can Vivien abandon everyone she loves and succumb to her past life’s barbaric force to defeat the demon? Her actions not only determine her future—but the future of the modern world.

Announcing her presence, Vivien slapped open palms against the bedroom door. Shrieking stopped as the banshee tried to stab into her intuitive power, not even making a dent.

Julie, I’m here to help. Don’t be afraid. After sending her telepathic message, she felt a definite shift. The young girl now had hope.

Sensing another female entity in the bedroom, Vivien tuned in sharper. A spirit connected to the house stood in front of Julie, also protecting her.

“That horrible noise stopped.” Neal eyed the door urgently. “Is that good or bad? I mean, is Julie safe?”

“Yes, she’s safe. I put a protective light around her.”

Heaving a sigh of exhaustion, he rubbed his temple. “Oh, right—the light thing. This is all so weird.” Neal’s head popped up. “No offense.”

“None taken.” She grinned like a debutant about to dance with the coolest boy in school.

Starra Andrews grew up in Laguna Beach, California, body surfing in the Pacific Ocean, writing fantasy stories, and acting on stage.  Having been influenced by the powerful scripts of Rod Serling and Richard Matheson from The Twilight Zone, she gravitated toward paranormal stories laden with hope.  Writing supernatural tales became her passionate hobby, in between life in the theatre.  She loves to sip hazelnut coffee, while reading a riveting ghost story, or while typing up an exciting new chapter of her own.  After attaining a B.A. degree in Theatre from University of California, Irvine, and attending LACC Acting Academy, an idea sparked for interviewing actors to help student actors.  Her non-fiction book The Pursuit of Acting; Working Actors Share Their Experience and Advice was published by Praeger Publishers/ABC CLIO.  In fiction, her heroine, psychic & paranormal cleanser Vivien Kelly and her team are in a race to rid the modern world of deadly Celtic creatures in her book trilogy The Kelly Society.  Bay of Darkness, the first book of the series is currently released through the Wild Rose Press.  Starra lives in upstate NY with her two cats, Audrey Hepburn and Vivien Leigh.

Where to find her: