Here’s the cover for The Cauldron Stirred, the first book of my young adult series, Guardians of Erin.  No release date yet, but I’ll keep you posted.  Many thanks to the artist, RJ Morris.  I love it!  What do you think?

Last time, I brought you along for the ghost hunt on my first trip to Ireland.   There are more stories where that came from!  My Irish cousins shared a wealth of information about my great-grandfather, Michael Patrick—who emigrated from Ireland in 1914—and his siblings.  Through fortune and loss, the family became fast friends with Irish luck.  One example concerned Michael’s brother, who missed his boat to America (the Titanic) but arrived unscathed on the Lusitania.

Luck was one thing.  What really intrigued me was the revelation that our family had encountered the supernatural on both sides of the Atlantic.  I’d had experiences my whole life, but they didn’t start with me.  Here are three which occurred long before I was born.

(1) Michael’s sister, Brigit, was promised to a young man who immigrated to America.  As soon as he saved enough money to set up house, she was to join him.  But once he left, she moved to Dublin, “took up with” a bricklayer, and became pregnant.  Nine months later, she was back home and in the throes of childbirth.  The doctor delivered a healthy baby, then headed off into the night.  A short while later, pain seized Brigit, and contractions began anew.  A second baby was born without the doctor’s aid.  Brigit died soon afterward.

In America that same night, her betrothed awoke and bolted upright.  Brigit stood at the foot of his bed, staring down at him.  She held his gaze for maybe a minute, then disappeared.

The next day, he sent a transatlantic cable to her family, relating the event and asking if she was all right.  They were as shocked by his account as he was by her death.

(2) One night, Michael and his mates were enjoying a round of drinks at the pub.  The door swung open, and another friend burst into the room.  He was wild-eyed, drawn, and out of breath.  Michael ushered him to their table.

The friend dropped onto a chair and raked a hand through his hair.  He glanced over his shoulder, then blurted out his tale.  He hadn’t slept for days.  He’d stolen the golden comb from a banshee, and now she chased him to reclaim it.

The group exchanged dubious looks and scratched their heads…until the man opened his coat.  Popping up from the inside pocket was a sparkling, gold comb.

He jumped up from his chair.  “Did ye hear that?”

The others shook their heads.

The next morning, he was found dead, spread out on his back, fully dressed, atop his perfectly made bed.  His coat lay open, and his attire was the same as the previous evening in all ways but one.  The golden comb was gone.

Tradition holds that banshees attract humans with gold or silver combs.  Then the banshee spirits the person away to another dimension…which is a pretty accurate description of death.

(3) One soft night, while still in Ireland, Michael plodded home.  The street was deserted until a “little man” appeared atop the stone wall and padded toward him.  A chill ran down Michael’s spine; something wasn’t right.  He averted his gaze.  A moment later, he felt compelled to look up.  The man was gone.  Then a flicker of movement across the road caught his eye.

There, on the opposite stone wall, stood the little man.  He’d traversed the distance in the blink of an eye.  He stared at Michael, who avoided his gaze again.  Seconds later, Michael glanced his way, but the man had vanished for good.

My great-grandfather had no doubt he’d seen a leprechaun.  According to legend, if you keep your eye on one, he can’t escape, but the minute you look away, he disappears.  That encounter stayed with Michael the rest of his life, and his eyes sparkled as he shared it with his grandson, my dad, who later shared it with me.

Is it any wonder a leprechaun pops up in my Guardians of Erin series?  It’s a way to honor Michael’s memory, and it’s just plain fun!  I recently turned in the edits of The Cauldron Stirred (Book One of the series) to my editor.  I’ll keep you in the loop as the book heads toward publication.  Happy St. Patrick’s Day! 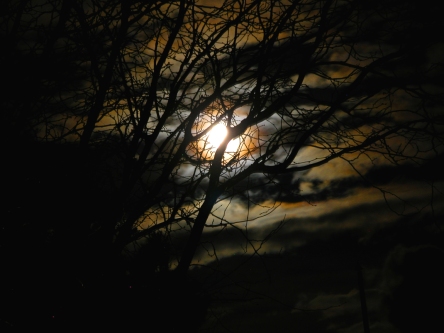 With St. Patrick’s Day on the way, I thought I’d share one of my favorite memories from the first time I visited Ireland.  I was eighteen at the time.  It was my first trip overseas with my parents and the perfect opportunity to meet our Irish cousins, who welcomed us with open arms.  The parents were a little older than mine; their five children, about my age.  They lived near Kilkenny, and while their current home was modern, their old residence still stood on the property.  When I say old, I mean centuries old!  My great-grandfather, Michael, had lived in the house before coming to America, and now his progeny explored the abandoned rooms.

History was alive there, in the people as well as the structure.  My cousins spoke of Oliver Cromwell as though he’d invaded Ireland three weeks (instead of three centuries) before.  I soaked it all up and was eager to learn more about the history of the area.

On the second day of our visit, my parents and I set out alone for some sightseeing.  We’d driven only a short distance when we noticed a castellated manor house set back from the road in beautifully landscaped, walled grounds.  Ever the intrepid photographer, my father was determined to get a picture of the place.  A view from the street marred by iron gates wasn’t good enough, so he found a side road and parked the car.  He marched onto the grounds, and my mother and I trailed behind.

I love my dad, but there are moments when he seems to channel Clark Griswold, Chevy Chase’s character in the Vacation movies.  This was one of those moments.

He made his way to the front lawn and paused.  Then he lifted the camera and seemed poised to capture the perfect snapshot of the manor’s façade.  All at once, two Dobermans tore around the side of the house.  Snarling like the hounds of hell, they raced toward him.  My father flinched and assumed a deer in the headlights look, then spun on his heel.

An abrupt command rang out and stopped the dogs in their tracks.  The homeowner, who strolled around the corner, appeared to be in her early sixties.  With inborn grace, she approached my father as my mother and I reached the scene.

Apologies ensued and in the end, the woman invited us to tour her home.  It was originally a medieval manor house but had been rebuilt in 1708.  Decorated with antiques, the structure oozed history.  We admired its elegance, but its owner struck us even more.  She was amiable as could be and deft at handling the large ring of tinkling keys she housed in her pocket.  Handle them she did, for all rooms had to be unlocked before we could enter, which seemed a little strange.  A lot stranger was the fact that she locked the door behind us every time we crossed the threshold, both into and out of each room.

Of all the rooms, one stood out.  Family portraits—paintings and photographs—covered the walls and adorned every piece of furniture with a flat top.  At first, the owner favored us with stories of her ancestors.  Then she indicated a black and white, circa 1950s picture of her deceased sister on the nearest table.  In both hairstyle and dress, the sister reminded us of Jackie Kennedy.  I made a mental note of the photo before the sound of jingling keys foretold our imminent exit.

At the end of the tour, we expressed our humble gratitude and returned to our cousins’ company.  They were excited by our recent adventure and divulged that no one except the owner had been in that house for years.  The property had a mysterious past shadowed by ghosts, fairies, and murder.

Was there a better place to investigate the paranormal?  In our opinion, no.  Were we up for the challenge?  Hell yeah.  Just before midnight, the lot of us set out in two cars for the manor’s extensive grounds.  We had no intention of trespassing; this time, we would stick to the road. 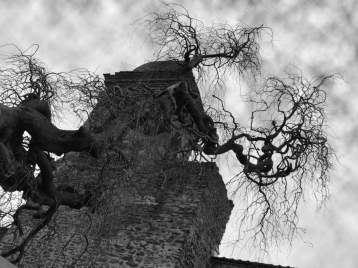 Absent any street lights, the said road and its environs were only visible by the grace of the moon’s glow.  I was just commenting on the fact when a peculiar sight stopped me in mid-sentence.  Outside the car, to our left, a woman in full riding gear (high boots, tan pants, black coat and hat) urged her horse onward.

One of my cousins twisted in his seat.  “Why is she out ridin’ in the middle of the night?”

No one had an answer, so we kept driving.  Farther down the road, we spotted the woman again.  This time, she was on foot, walking her horse in the field.

We continued on, but as we rounded another bend, my cousin made an odd, strangled sound.  “There’s no sense to it.  How did she get there so fast?”

I shrugged, then frowned as a new thought struck me.  “Isn’t it dangerous to ride in the dark?”

My father hit the brakes.  The second car halted behind us, and everyone hopped out.

“It isn’t right,” another cousin said.  “How could she be here one minute and there the next?”

Nonplussed, we peered down the road, seeking a distant outline of both horse and rider, for we’d all seen the same thing.

“WHAT ARE YOU DOING HERE?”

We whirled around and there, not five feet away, was the woman.  The horse was nowhere in sight.

Our senses reeled.  Her presence seemed impossible, yet there she was.

Perhaps it was nerves, or the absurdity of the situation, but my father blurted out the bald truth.  “We’re looking for ghosts.”

She regarded him for a long moment.  “They say you can spot them sometimes at night.”

I cleared my throat.  “Have you seen any?”

The hint of a smile touched her lips.  “No.  But you never can tell.”

My parents, cousins, and I exchanged glances and awkward giggles.  Then we turned back to the woman.

She had vanished.  Her entrance and exit were as silent and preternatural as the grave.

Back at my cousins’ house,

we gathered around the large kitchen table and nursed mugs of hot tea between our chilled hands.  Only then did my parents and I recall the manor’s portrait room and the owner’s remembrance of a beloved sister…a sister she had lost.

Our agreement was instantaneous.  The midnight rider looked exactly like the woman in the picture.

Speaking of Ireland, I’m close to finishing the edits of The Cauldron Stirred, the first book in my Guardians of Erin YA series.  I’ll keep you posted during the production process!