books on sale, Flight of the Raven, Judith Sterling, medieval romance, Night of the Owl, paranormal romance, Shadow of the Swan, Soul of the Wolf, The Novels of Ravenwood 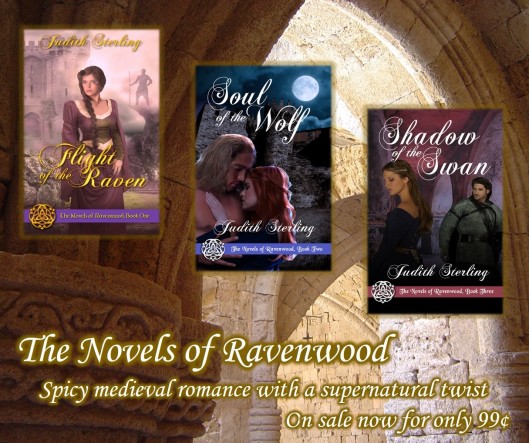 I’m nearing the finish line with Night of the Owl, the fourth of The Novels of Ravenwood. Starting today, the first three are on sale for 99 cents! If you like medieval romance, here’s your chance to catch up on the story. 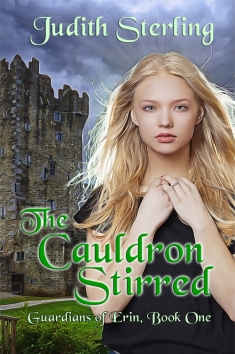 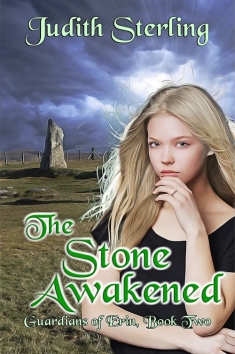 My recent giveaway for signed print copies of The Cauldron Stirred and The Stone Awakened has ended.  A million thanks to each and every one of the 682 entrants!  Alas–and to paraphrase a famous quote from the movie Highlander–there could be only one winner.

Congratulations to Jodi Hassel!  I’m sending the books on their merry way and hope you enjoy the story.  I’ll start writing The Sword Unsheathed, the third book in the Guardians of Erin series, next month.

Again, thank you to everyone who entered.  Hope you’ll check out my books, but whether or not you do, I’m wishing you a bright, beautiful 2019! 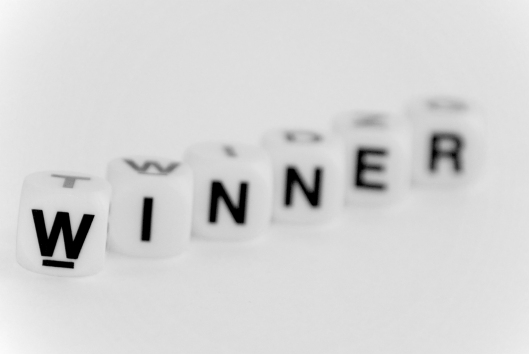 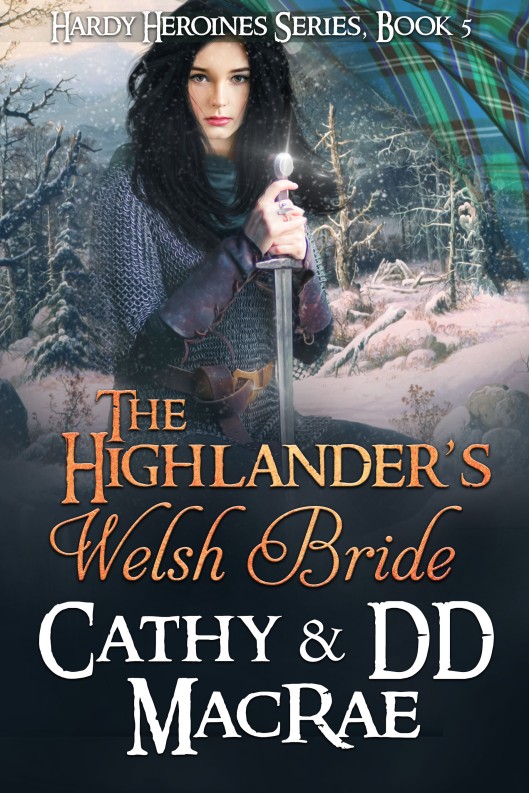 I’m excited to have bestselling author Cathy MacRae here! She’s part of our Medieval Mondays group, and today we’re talking about her new release, The Highlander’s Welsh Bride, the latest in the Hardy Heroines series. Scotland and Wales are two of my favorite places, so I’m eager to ask some questions. Pull up a chair and let’s hear what Cathy has to say!

What inspired you to write this book/series? Of course, following the other books in the series was the initial nudge, but this particular book arose from the finality of the Welsh Wars of Independence. What would a young woman do to escape the loss of her family and remain out of reach of King Edward Longshanks? Flee to Scotland, of course.

Of course! Have you encountered any of the characters in a dream? No, I don’t believe I have, though I occasionally have brilliant insights into characters (why they act a certain way) or a scene that’s been eluding me either right as I fall asleep or as I’m waking in the morning.

I get that too! There’s something magical about those moments just before and after sleep, opening doors to a whole world of perceptions. If you could give your hero, Birk MacLean, a word of advice, what would it be? Lighten up. He’s convinced he isn’t loveable and often manipulates people to keep them from seeing his true motives.

Any advice for your heroine, Carys? Be patient. Birk isn’t who he seems to be. There is a good heart in him.

In general, which do you enjoy writing more: description or dialogue? Oh, gosh. I love writing both. Dialogue often runs away by itself, but description pulls me deeper into the story.

I understand completely! What do you love most about being an author? I love creating my worlds and the characters in them. Even better, I get to share them with readers! It truly brightens my day to get a note from a reader who wants to chat about a story, or to encounter someone who believes in my characters as much as I do.

Yes, those are wonderful experiences! Thanks so much, Cathy.  You, DD, and your characters are always welcome here.  Best of luck with the new release! 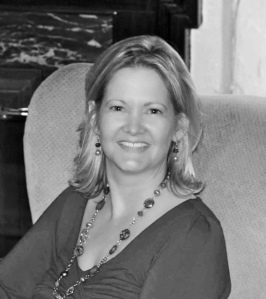 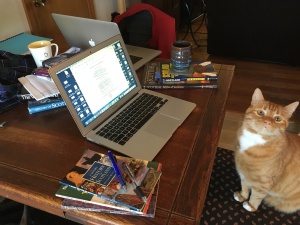 A bit more about The Highlander’s Welsh Bride:

It was over. Prince Llywelyn was dead, his soldiers fleeing before King Edward’s army. Carys, a distant cousin to the prince, herself a princess of Wales, had picked up arms alongside her husband more than a year ago. Now homeless, her husband buried beneath the good Welsh soil, she seeks shelter in the north, far from the reach of Longshanks’s men. Carys and Wales would never be the same again.

It was time. Birk MacLean has been ordered to take a bride and produce an heir. He grows weary of the lasses paraded before him, women of delicate nature and selfish motives. He desires a wife strong enough to help lead one of the most powerful clans in Western Scotland.

One like the Welsh woman sitting in his dungeon, arrested for poaching MacLean deer.

Can Birk convince Carys marriage to him is preferable to a hangman’s noose? And will the heard-headed Scot be worthy of a Princess of Wales?

A peek inside the pages:

Birk grabbed the decanter of wine and poured the blood-red liquid into two heavily embellished silver goblets, offering one to Carys.

“Slàinte mhath.” He tipped the goblet to his lips and drank.

Carys ran her fingers over the intricate chasing near the rim and dipped a fingertip in the liquid. “Drunk? And in front of all our guests. ’Tis a fine way to begin a marriage. This was your idea, if you’ll recall.”

Birk set his goblet down with a thump of metal against the cloth-covered wood.

“I dinnae wish to remarry at all. ’Tis not about ye.”

Carys pushed her drink away, furious with his lack of courtesy. “Well, a drunkard rarely has a stiff cock,” she observed caustically. “Mayhap one of us will get a good night’s sleep. At least no one will be expecting bloody sheets on the morrow.”

“I am nae so hung over as that,” he growled.

“Oh, I’m certain I’m relieved to hear it,” Carys purred, heedless of the warning gleam in his eyes. Brody was likely right. Her husband’s bad mood was probably more about his sore head than his marriage—though she rather doubted he’d have gotten roaringly drunk the night before if he hadn’t been marrying her on the morrow.

She had to admit the thought irked. A lot.

“A woman has expectations, you know.”

Carys folded her hands on the table and leaned forward, resting her breasts on the arc of her wrists, deepening the valley between them as they swelled above the gown’s modest neckline. Birk’s gaze dropped. An ironic smile twitched Carys’s lips. Men were so predictable.

“Expectations of her wedding night,” she said, drawing her words out, voice husky. Birk’s attention wavered. Carys rose, abandoning her moderate display, and, placing the fingers of one hand on a heavily muscled shoulder, paced slowly to his other side. She drew her fingertips lightly across his back to the other shoulder and feathered them down his arm.

“I’ve been there before, as have you,” she murmured, sending an appraising look up and down his body, deliberately baiting him, not knowing how to tame the wildness rising unexpectedly inside. “Terwyn was kind and considerate.” She lifted a limpid gaze to Birk’s. “Are you?”

Buy the book on Amazon: https://www.amzn.com/dp/B07KNYTMPK

A little more about Cathy:

Amazon best-selling author Cathy MacRae lives on the sunny side of the Arbuckle Mountains where she and her husband read, write, and tend the garden—with the help of the dogs, of course.

Award-winning and Amazon best-selling author DD MacRae enjoys bringing history to life and considers research one of the best things about writing a story! With more than 35 years of martial arts training, DD also brings breath-taking action to the tales.

You can visit with Cathy & DD at www.cathymacraeauthor.com and sign up for their newsletter!

Other ways to connect with Cathy: 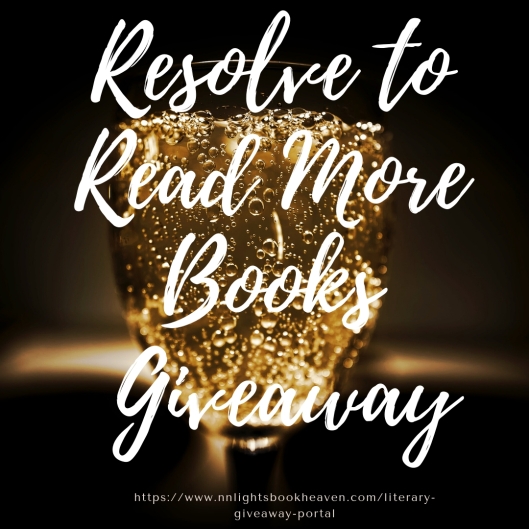 It’s a brand-new year, and many of us have made resolutions. Here’s one that should be easy to keep: read more books in 2019! N. N. Light’s Book Heaven is sponsoring an incredible giveaway where you can win audiobooks, autographed print copies, and digital books. Everything from historical romance to nonfiction and everything in between is up for grabs, and you might win one of my books. Enter to win below and good luck!

excerpt, Flight of the Raven, Judith Sterling, magic, medieval romance, Night of the Owl, The Captivating Quill, The Novels of Ravenwood 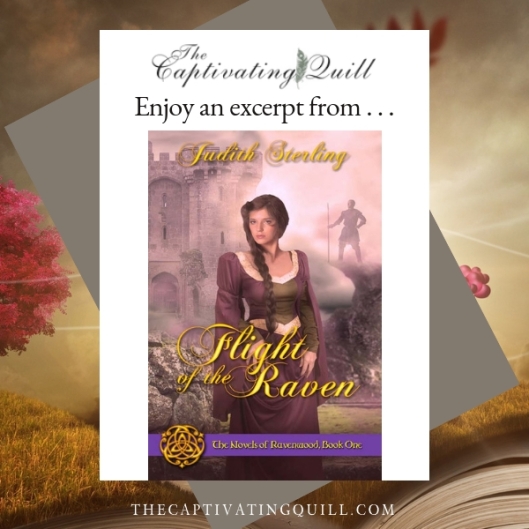 I hope 2019 is treating you well.  I’m busy but content, and I trust I’ll meet all of my deadlines!  The nearest one is January 31, when Night of the Owl, the fourth of The Novels of Ravenwood, is due in to my editor.

Today, “The Captivating Quill” is featuring an excerpt from the first book in that series, Flight of the Raven.  Click here to read it and learn about a magical “coincidence” when I first plotted the story.

Wishing you a lovely Wednesday!  🙂