dreams, Flight of the Raven, Iceland, Judith Sterling, medieval, romance, Shadow of the Swan, The Novels of Ravenwood, travel

In the summer of 1993, after living in Sweden for six months, I flew back to the States.  My flight had a three-hour layover in Iceland’s Keflavík International Airport, just outside of Reykjavík.  I remained in the airport for the duration, but I couldn’t shake the curious murmur of destiny that tickled my ears.

This place is important.  Not Keflavík or Reykjavík, but farther out.  One day, you must return.

Six years later in Virginia, after I moved in with my husband (then fiancé) Dan, I had a vivid dream.  I drifted with the wind over fjord and field to what seemed a farewell scene.  A woman with long, dark blonde hair stood beside a horse and rider.  The man astride the horse had shoulder-length red hair and a full beard, and I sensed he held a position of importance.

I floated toward the woman’s back and suddenly became her.  The mergence held long enough for me to exchange good-byes with the man.  Then I shifted back out of her and hovered in the air, regaining my modern identity.

Without warning, as though whacked over the head with Thor’s hammer, I became infused with knowledge.  It was the 10th century, and we’d spoken Old Norse.  There’d been a meeting of chieftains, and the red-haired man was setting out on a long journey.  I (as the woman) had used precognitive skills to verify his safety and success.  I knew he cared for me and hoped we’d be reunited soon.  Less clear was our exact location.  I received a strong impression of Iceland, but murmurs beyond it hinted at the Isle of Man, the Hebrides, and a land of promise far to the west.

Then it dawned on me:  the character on horseback was Dan.  The one looked nothing like the other, but their essence was the same.  It didn’t feel like a dream; it resonated as a moment in history, from Dan’s past and mine.

One week later, we snuggled on the couch and watched the film Smilla’s Sense of Snow, part of which takes place in Greenland.

As the movie ended, I sighed.  “I have to go to there someday.”

Did I?!  By week’s end, we’d booked a five-day excursion departing in mid-February.  His willingness to make the trip in the dead of winter confirmed what I’d come to believe as truth:  I had met my match.

Here was a fellow fan of wind and snow.  Here, too, was the bearded man I’d known and loved in a distant but distinct dreamtime.

We spent a couple of days in Reykjavík and its environs.  Two of the more impressive sights were the Strokkur geyser and the majestic, half-frozen Gullfoss (Golden Falls).  Honorable mention goes to a “Viking restaurant” in Hafnafjöđur.  During our meal, traditionally clad men serenaded us with old Icelandic tunes whose meter and mode conjured visions of longships on the prowl.  The food was delicious…until we tried an Icelandic delicacy called hákarl.  That’s putrefied shark to you and me!  Thanks to a chaser of brennivín, an Icelandic schnapps, we stomached it and lived to tell the tale.

Next, we flew up to the “capital of the north,” Akureyri.  For three days, we braved the elements to cover as much ground as possible.  The snow was deep, and the wind was fierce, which translated to lonely stretches of road where our rental car was the only vehicle around.

There seemed a definite shortage of fellow tourists, but we did come across a group of Icelandic horses.  They squinted and blinked at the icy blasts, and they acknowledged us with quizzical expressions.

I could almost hear their thoughts.  Are you two crazy?  Even we would rather be indoors!

Still, we carried on, from the old whaling town of Húsavík to the towering lava formations called Dimmuborgir (“Dark Castles”) of Lake Mývatn.  One afternoon as we drove along yet another windswept, deserted road, the clouds parted, allowing a shaft of light to illuminate a giant shape in the distance.

It was a volcanic hill, but it had the aura and majesty of a mountain.  Its relatively flat top was rounded at the edges, which softened its otherwise looming presence high above the snow-covered plateau.  We nicknamed it “Valhalla” because (1) it attracted the only ray of light for miles around, and (2) its brilliance seemed blinding to eyes now accustomed to leaden skies.

Those skies remained our constant companion as we explored numerous craters and other volcanic creations around Mývatn, but whenever “Valhalla” came into view, it shone like a beacon.  We had to laugh.  It seemed preposterous that the sun should ignore every feature of the landscape but one.

That night, in our Akureyri hotel room, a strange sound woke me.  I rolled over in bed and stared at Dan.

He was talking in his sleep, but not in English.  It was a Scandinavian tongue, similar to Icelandic, and I almost understood it.  I felt right on the verge, like when a word or thought is on the tip of your tongue.  Given a slight, indefinable shift, I would’ve comprehended it.

All at once, I knew.  He was speaking Old Norse.

I didn’t wake him, and after a couple of minutes, he stopped.  But his easy pronunciation, fluency, and the authority of his speech echoed in my mind.

I thought of my mom.  Twice before, she heard me speak another language in my sleep:  Irish in Ireland and years later, Welsh in Wales.  For the record, I’ve never learned those languages, just as Dan has never learned a Scandinavian one. 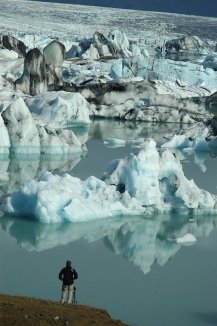 That was 17 years ago this month.  The experience lent the trip a touch of magic.  But all travel has the potential to be magical.  Distant places and different cultures expand our horizons and wake us up in profound ways.  I can’t help thinking of a quote from the movie Dune.  “The sleeper must awaken.”

In The Novels of Ravenwood series, the heroes of Books 1 and 3 are knights who’ve recently returned from the Holy Land.  They experienced the horrors of battle, but also learned to appreciate aspects of the cultural mix they encountered.  I’m still writing the third book, Shadow of the Swan.  But you can check out the first book, Flight of the Raven, to learn how the hero’s time overseas influenced him.  Happy reading! 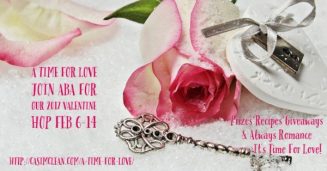 A big thanks to everyone who stopped by my blog for the ABA “A Time for Love” Valentine Blog Hop.  I did the drawing for the free digital copy of Flight of the Raven, and the winner is kitsyclare.  Congratulations!  Please email me at judithsterlingmarshall@gmail.com and give me your contact info, so I can send your prize on its way.  Thanks again!

Amazon pre-order, Flight of the Raven, historical romance, Judith Sterling, medieval, Soul of the Wolf, The Novels of Ravenwood 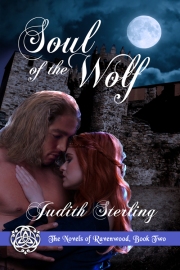 keeping with the spirit of Valentine’s Day, Soul of the Wolf (The Novels of Ravenwood, Book Two) is now available for pre-order on Amazon.  The worldwide release date is April 12, 2017.

A Norman lady shows a Saxon sorcerer there’s no greater magic than love.

blog hop, Flight of the Raven, Judith Sterling, Soul of the Wolf, The Novels of Ravenwood, true love, Valentine's Day

Thanks so much for visiting this stop on the Valentine Blog Hop!  We’re talking about love, and I’ll be delving into my family history.  Comment below, and you could win a free e-copy of my medieval romance, Flight of the Raven, the first of The Novels of Ravenwood.  So without further ado…

This October, my husband and I will celebrate our 17th wedding anniversary.  Last April, my parents celebrated their 50th.  But as Valentine’s Day approaches, I want to focus on the marriage of my maternal grandparents, better known as Nanny and Poppy.  Their bond was true and as strong as they come.

When Poppy’s naval ship sank during World War II, Nanny received word he’d been killed in action.  She ignored the telegram and remained calm, but not out of denial.  Her keen intuition—passed down to my mom, me, and my twins—insisted he was alive.  Months later, her belief was vindicated, and they spent the rest of their lives together in Virginia, Peru, and finally, Florida.

After 68 years of marriage, Nanny passed away.  Shortly thereafter, Alzheimer’s seized Poppy, and he moved into a nursing home.  His health plummeted, and my parents rushed to his side.  The nurse told them he was comatose and hadn’t spoken for four days.

It was a miracle of sorts.  Not only did he speak, but he recognized my mom.  She stayed in his room from that point on.

Two days later, throughout the day, his gaze darted around the room and up to the ceiling.  He repeatedly raised his arms toward what he saw.

The next day, my mom, her best friend, and the nurse witnessed an incredible reunion.  Something unseen lifted Poppy and held him so he sat up in bed.  Though his muscles were dormant, the movement was quick.  He could never have accomplished the feat on his own.

An expression of intense love transformed his features.  My mom sensed another presence in the room and was certain he gazed upon the person he loved most in the world, Nanny.

The next morning and afternoon, seven hawks circled outside his window.  His time had come; still, he hung on.  Toward the end of the day, my mom grabbed the phone.  Her gut told her Poppy needed to hear from his other daughter, so she called her sister and held the phone to his ear.

He murmured his last words, the only ones he’d spoken—besides “I love you too”—for nine days.  “Bye-bye.”

Two hours later, he died.  It was November 23, five months to the day after his wife’s death.  The next night, my three-year-old sons woke me and my husband from a sound sleep to report that Nanny and Poppy had appeared in their bedroom.  My grandparents came together to check on the boys while they slept.

Their love lasted a lifetime and then transcended it.  That’s the kind of love I write about in The Novels of Ravenwood series.  Physical attraction is great, and it abounds in Flight of the Raven, Soul of the Wolf, and the three books to follow.  But you’ll also find something deeper:  the meeting of minds, the interplay of souls.  These are the things which pave the way for true and lasting love.  And on that note, Happy Valentine’s Day!

Here’s the scoop on Flight of the Raven! 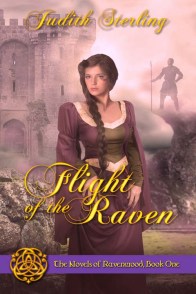 How eager would the bridegroom be if he knew he could never bed the bride?

Lady Emma of Ravenwood Keep is prepared to give Sir William l’Orage land, wealth, and her hand in marriage.  But her virginity?  Not unless he loves her.  The curse that claimed her mother is clear:  unless a Ravenwood heir is conceived in love, the mother will die in childbirth.  Emma is determined to dodge the curse.  Then William arrives, brandishing raw sensuality which dares her to explore her own.

William the Storm isn’t a man to be gainsaid.  He’ll give her protection, loyalty, and as much tenderness as he can muster.  But malignant memories quell the mere thought of love.  To him, the curse is codswallop.  He plans a seduction to breach Emma’s fears and raze her objections.  What follows is a test of wills and an affirmation of the power of love.

for the next stop on the valentine hop, click below: 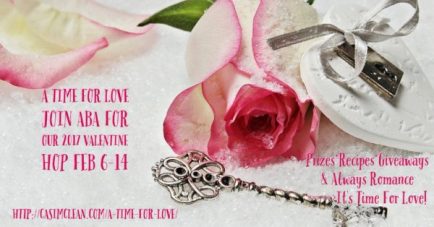