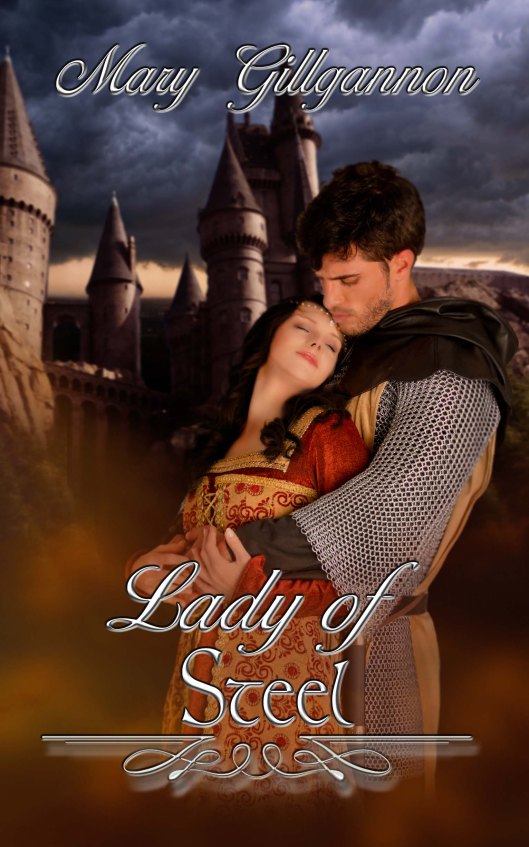 If you’re following my “Bad Guy” excerpt from Shadow of the Swan, you can find the tenth snippet on Mary’s blog here. Remember to leave a comment there for a chance to win digital copies of the first three books in The Novels of Ravenwood series!

His opponent was weakening, the movements of his bulky body growing sluggish. Mortimer’s breath came in harsh rasps. As if watching it from far away, Fawkes observed his blade striking nearer and nearer to Mortimer’s mail-clad body. Blood dripped from a wound on Mortimer’s left arm and another at his hip. Any moment he would falter and Fawkes would land the killing blow. Victory was so near he could almost taste it.

“Is she worth it, you fool?” Mortimer panted. “If you kill me, you’ll have to face Richard someday and tell him why. Do you think he’ll be pleased you took my life over a woman, and a perfidious, scheming slut at that?”

A little more about Lady of Steel:

One rapturous hour sparks unforgettable passion between Lady Nicola and Fawkes de Cressy. The memory of their time together enables Fawkes to survive the perils of the Crusades and gives Nicola the hope and strength to endure a brutal marriage. But when Fawkes returns three years later, he finds Nicola enmeshed in a dark web of castle intrigue. Fawkes has also been altered by the hardships and cruelties of war, and Nicola fears to trust him with her secrets or her heart.

Surrounded by enemies, the battle-hardened knight and the aloof, wary woman must rebuild the bond between them. Only if they dare let the soul-stirring magic their bodies share grow into love can they escape the sinister plot that threatens to destroy them both.

See you next Monday, when I’ll feature the final snippet of my own “Bad Guy” excerpt from Shadow of the Swan.  Until then, here’s another look at our latest Medieval Monday video.  Have a lovely day!

Welcome back to Medieval Monday! I’m thrilled to have my dear friend Mary Morgan here today. We’re featuring her medieval romance, Dragon Knight’s Ring, the fifth book in her Order of the Dragon Knights series.

If you’re following my “Bad Guy” excerpt from Shadow of the Swan, you can find the ninth snippet on Mary’s blog here. Remember to leave a comment there for a chance to win digital copies of the first three books in The Novels of Ravenwood series!

“Ye have yet to ken the real one.” Opening his arms wide, Lachlan started to chant. His eyes blazed red, and his fingers lengthened into misshapen claws.

“Hold on Meggie,” ordered Adam and grasped her hand with the ring within his. Holding their joined hands high, he quickly looked at her. “Whatever happens, wait until the dragons appear. Do not let go!”

Follow along next week on Ruth A. Casie’s blog and leave a comment for a chance to win a signed print copy of Dragon Knight’s Ring.

A little more about the book:

Crusader, Adam MacFhearguis is on one last quest to the standing stones in Scotland where he seeks to bury the past. However, a silent prayer sends him to an unknown future and to his beloved Meggie. When he uncovers a shocking revelation, Adam questions everything about the woman he thought he knew and loved. He may have traveled the veil of ages, but time is now his enemy.

Margaret MacKay lives a life in the future without the memories of her past—her death. When Adam arrives at her door confessing he knows her, she is confused and wary. With each passing day, she yearns to learn more from this stranger. Yet, when a truth is revealed, can she trust the man to unlock the chains from her mind and heart?

Will love free the bonds to unite the two lovers who were doomed centuries ago? Or will evil finally claim victory over the Dragon Knights?

Enjoy this Medieval Monday video, and I’ll see you next week! 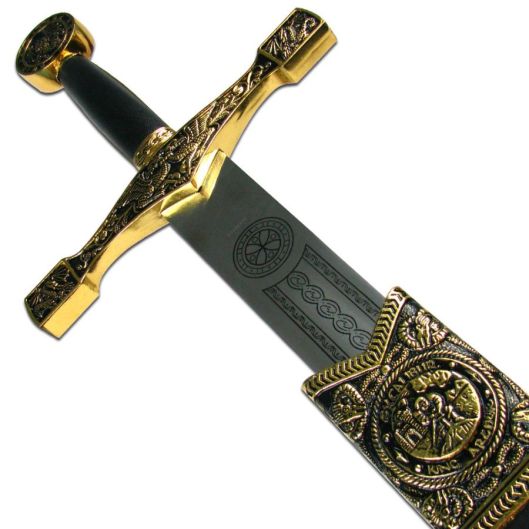 I’ve had a lot of deadlines lately!  August 1, I sent my editor the completed manuscript of The Sword Unsheathed, the third book in my Guardians of Erin young adult paranormal fantasy series.

Two days ago, I turned in the final galley for Night of the Owl, the fourth of The Novels of Ravenwood medieval romance series.  I hope to reveal the cover for that book soon!

Today, I’m working all day at The Witch House (the 17th-century home of Jonathan Corwin, one of the 9 judges during the Salem Witch Trials of 1692).  But tomorrow, I’ll be listening to–and marking corrections for–18 chapters’ worth of audio files for the audiobook of The Stone Awakened, the RONE Award-nominated second book in my Guardians of Erin series.

So there’s a lot going on!  I’ll have more news soon.  In the meantime, I’m wishing you a lovely day and week ahead.  🙂

Welcome back to Medieval Monday! I’m excited to have award-winning author Ashley York here today. We’re featuring her medieval romance, Daughter of the Overking, the third book of The Warrior Kings series.

If you’re following my “Bad Guy” excerpt from Shadow of the Swan, you can find the eighth snippet on Ashley’s blog here. Remember to leave a comment there for a chance to win digital copies of the first three books in The Novels of Ravenwood series!

She shook her head, the movement causing shooting pain behind her eyes, and suddenly the room grew blurry all around her.

“No accident. He was murdered.” The tall man’s words were met with stunned silence.”

“Who would wish him dead?” Tadhg asked.

A little more about Daughter of the Overking:

A mistaken identity. A gruesome murder.

Trained as a warrior…

Brighit of Clonascra despises the trappings and demands of womanhood and is far more comfortable training for battle. Long held alliances require she set aside selfish dreams and take Darragh as her husband. The union intended to promote peace between the clans is interrupted by the shocking murder of a neighboring king and she quickly discovers there are far worse things than being wed.

Trained to be king…

Darragh of Drogheda has no wish to be king, but he is an obedient son and supports his father’s plans. His marriage to Brighit, however, will be no hardship at all since he finds her most intriguing when she fights him at every turn. A she-warrior indeed. Her persistent dismissal of him merely blows the fire aflame and sets him down the path to discovery of all her most tightly held secrets—secrets that could cost him his life.

Check out our Medieval Romance Lovers page on Facebook and enjoy this new Medieval Monday video: 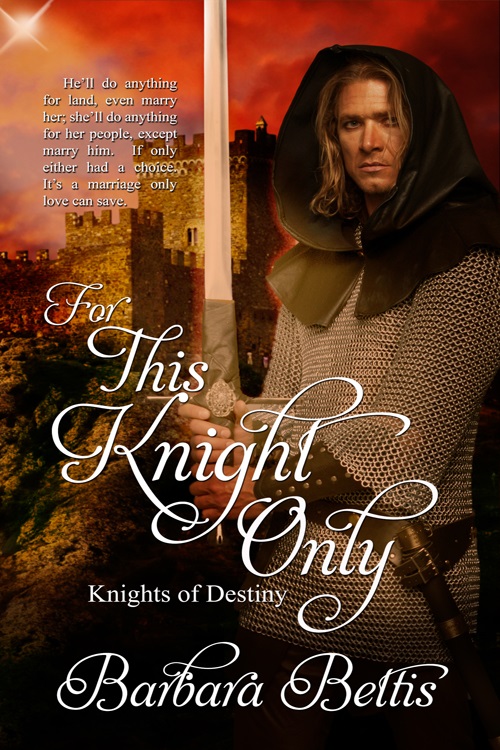 Welcome back to Medieval Monday! I’m thrilled to have my friend Barbara Bettis here today. We’re featuring her medieval romance, For This Knight Only, part of her Knights of Destiny series.

If you’re following my “Bad Guy” excerpt from Shadow of the Swan, you can find the seventh snippet on Barbara’s blog here. Remember to leave a comment there for a chance to win digital copies of the first three books in The Novels of Ravenwood series!

Looking smug, Paxton added, “As for Sir Martin and his three, the king believes they died defending him. I, myself, am recovering from wounds at a snug little farmhouse with excellent ale stocked by a charming widow.”
John nodded once. “That is the story, then. Go home. Clean yourself up and rest.”

Paxton had turned when he heard, “You identified Cantleigh?” At a nod, John drawled, “Was anything found on him?”

Incriminating evidence, perhaps? Are you becoming careless in your panic?

To brush up on last week’s installment, visit Barbara on Ruth A. Casie’s blog and comment to be entered in a drawing for a free eBook.

Follow along on Cathy MacRae’s blog next week and comment there, too, for a chance to win.

A little more about the book:

Sir Roark will do anything to gain land, even beguile an unwilling lady into marriage. He knows she’s much better off with a man to take control of her besieged castle, to say nothing of her desirable person. But it isn’t long before he discovers that, although her eyes sparkle like sunlight on sea waves, her stubbornness alone could have defeated Saladin.

Lady Alyss is determined to hold her family’s castle, protect her people, and preserve her freedom— until her brother’s dying wish binds her to a stranger. Still, she’ll allow no rugged, over-confident, appealing knight to usurp her authority, even if she must wed him. Especially since he thinks a lady’s duties begin and end with directing servants. Alyss has a few surprises for her new all-too-tempting lord.

But when a common enemy threatens everything, Roark and Alyss face a startling revelation. Without love, neither land nor freedom matters.

August has arrived, and the “dog days of summer” are in full swing. I don’t know about you, but I am DYING for the crisp, cool weather of fall! 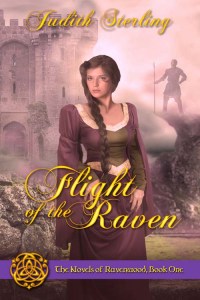 If there’s a particular book or prize you’d like to win, be sure to specify which one when you enter via Rafflecopter. Enter below and good luck!

Have a beautiful day and a great weekend!  🙂