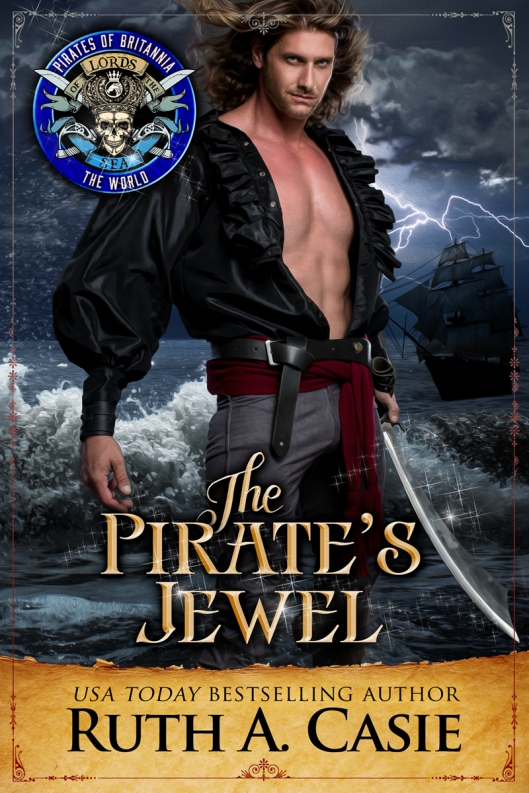 Welcome back to Medieval Monday!  Our nature theme continues with stormy seas ahead!  I’m featuring The Pirate’s Redemption by USA TODAY bestselling author Ruth A. Casie.

If you’re following my excerpt from Night of the Owl, you can find the fourth snippet on Ruth’s blog today: http://www.RuthACasie.blogspot.com

The ship glided out of the protection of the dock and sailed into the churning channel. Huddled under the sail, hugging her knees, Darla thought she might as well be blind. To add to her discomfort, the aroma of beer from the surrounding barrels was overpowering in the small space.

The rise and fall of the ship had her holding on to the barrels for dear life. Large raindrops that randomly pelted Darla’s shelter intensified. The ends of her canvas hideout fluttered and hammered a beat as gusts of wind plowed into the standing barrels sending sprays of water through the spaces between them. The tight ropes holding her sanctuary together sang as they strained against the pitching of the ship and onslaught of the wind and rain.

Did you miss excerpt three? Find it on Jenna Jaxon’s blog http://jennajaxon.wordpress.com

Join Ruth next week for another excerpt on Cathy MacRae’s blog https://www.cathymacraeauthor.com/bits-n-bobs-author-blog

More about the book:

Deception and family honor are at stake – so is her heart.

Wesley Reynolds will do anything to avenge his family’s banishment from Dundhragon Castle even throw in with the notorious pirate, MacAlpin. His plan, ruin Lord Ewan’s trading network. He has a more devious plan for his father’s ‘best friend,’ the man who abandoned them at the eleventh hour. He’ll ruin the man’s most precious jewel, his daughter Darla. Wesley’s so close to ruining the trade network and succeeding he can almost taste it, but revenge is not nearly as sweet as Darla’s kisses.

Darla Maxwell, beloved by her parents has no prospects of marriage. Her father and Lord Ewan search to find her the right husband. Darla’s special gifts are frightening to many. She has visions that often come true. The murky image of a man haunts her, she’s sure it’s Lord Ewan’s soon-to-be son-in-law, but the vision morphs when she meets Wesley. The meaning couldn’t be any clearer to her, her destiny lies with Wesley.

When revelations surface indicating Wesley has been deceived and his revenge misplaced. Will he find the truth of what really happened to his family in time to stop the pirates? Will Darla ever forgive him? Will he ever forgive himself?

“Ruth A. Casie’s vivid descriptions place you right in the story. It is a wonderful read I highly recommend.” ~ Deb

Where to buy it:

See you next Monday! 🙂