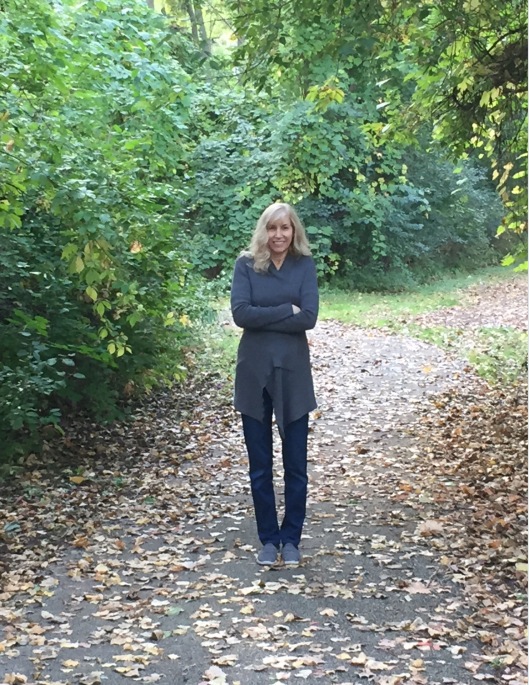 At what age did you write your first story? Does it count if it was before I learned how to write? I don’t remember a time when I wasn’t conjuring stories in my head. When I was too young to write, they usually began with “what if.” Actually, my stories still often get their start that way. One time in school the teacher told us to write a paper, the life story of a fictional person. I was so excited! My fictional character was a detective. I had him surviving all kinds of dangerous situations while solving crimes. My paper received a C. The teacher said I’d written a fictional story, not the life story of my fictional person. Fortunately, she liked the paper enough so I didn’t fail the assignment.

Which genre was the first to hook you? After I graduated from children’s books, the first story I truly loved was Paper Moon by Joe David Brown. It was the first “big” book I ever read. It was in my hands at every chance. For a reason I’ll never understand, and was too wise to question, all the reading annoyed my father. By the time I finished the book, he’d given me such grief, I was finished reading, for years. At eighteen I moved out of my parents’ house. Reading was still a bittersweet memory until a good friend, Mike Campbell, told me about a book he’d read. He told me he’d ditched two days of school to finish it. I couldn’t stop thinking about that book. It kept at me until I finally bought it: The Stand by Stephen King. My love of reading was mine again. I was grown and on my own, and I will never go without books again.

What was your first published book? The Marshal’s Pursuit. A scene kept playing in my head, so I finally surrendered to it and wrote the book. When I got to the love scenes, as usual, I held back, too embarrassed to let go. Then I thought, Well, everything I write gets rejected, so, have some fun and go for it. About ten minutes after I signed the contract, it struck me: Oh, my friends are going to read this!

I know what you mean; there are quite a few love scenes in my medieval romances, and even my parents have read them! What’s your favorite part of the writing process? Brainstorming? Research? Outlining? Writing? Editing? My favorite part is polishing. In the early stages of a manuscript I spend so much time berating myself, my work, my skills, that when it’s finally all together and I’m proud of my work, I love putting on the finishing touches. It feels SO good.

I love that too! What are you working on now? The second and third books of my Request series. The series is set in London, early nineteenth century. I also have plans for the next two books after the series. One, family drama? I’m not yet sure how to categorize it. The other is a romantic comedy. Also, I have two other stories lurking in the back of my head. Both of those are quite dark.

I love the Regency Era, and London makes a great setting for your Request series! Of all the settings you’ve used (or created!) for your books, which is your favorite? Why? Las Vegas. It’s my hometown. It’s a city with endless stories, both real and in my mind’s fiction. I used it for the setting in The Darkest Sum. On the news one night, I saw a story about tunnels that run underneath the city. It put a story in my mind, but before I even wrote the first word I realized the story needed a creature. And it had to be a monster with real purpose and reason. The romantic comedy I’m working on is also set in Las Vegas.

Have you ever dreamed about a character you created? All the time. The ones that cost me sleep, though, are the ones who glide through my dreams so fast I can’t quite catch hold of them.

If you could have a conversation with anyone—dead or alive—who would it be? The list is long and difficult to narrow down. I have a problem with decisiveness, so how about one dead, one living? They would be George Carlin and Judge Judy.

Interesting choices! If you could travel to any time and place, when and where would that be? I’ve started making notes on a story where the character lives ten years, from age 20 to 30, over the course of several decades. That’s what I’d like to do. Then I could go everywhere.

If you could step inside any book or series and live there for a week, which would you choose? I’d love to hang out with Spenser, from the Robert B. Parker series. Or maybe Milo, from Jonathan Kellerman’s Alex Delaware series. Ooh, or one of about a million historical romance novels. There goes my indecisiveness again. Sorry.

LOL. No problem! I understand. If a fairy godmother appeared and offered you one thing—anything at all—what would you request? I wish everyone would be nice to each other, and to all animals. I know that sounds childish, but you asked. The cruelty in this world weighs on me. The Darkest Sum was somewhat cathartic in that the story let me address some of the things I think, and hope others feel, too.

I love your answer; it’s not childish at all.  If only that fairy godmother did exist! Now, it’s time to learn some of your favorites.

I love that too! Eye color: All the colors have beauty I can appreciate.

Foreign language (whether or not you speak it!): A Scottish brogue makes me melt.

One of the things I loved about living in Scotland! Of all the Scottish accents, I particularly like the one spoken in and around Fife. Song: Depends on my mood. I listen to a variety of music, but I love most subgenres of rock.

Book: Both in my writing and my reading, I’m a genre-hopper. I owe a gratitude to Paper Moon and The Stand, (and Mike Campbell). Oh, and a special thanks to Dinah Hafen for giving me my first historical romance novel, Judith McNaught’s Once and Always.

Movie: I love a good romantic comedy, or action hero movie. As with books, I enjoy a
variety of stories, but I can’t tolerate a tear-jerker. I get enough of that in the news.

TV show: Breaking Bad, Judge Judy, Walking Dead, Orange is the New Black, Better
Call Saul, Monk, Meet the Press. Clearly, I don’t do well when I can only pick
one, lol. I’m starting to think I deserved that C.

LOL. Cuisine: I’m vegan, so, pretty much anything that’s vegan.

US location: My hometown of Las Vegas will always have my heart. No place in
the world can compare. I’ve been living in Michigan for a while now and
I have to say, with the masses of trees, the rivers, the lakes, the great many
lovely little towns, it’s impossible not to love it here. I even like the winter,
which earns me some strange looks from those who hate it. Autumn,
though, oh! It could be fall most of the year and I’d be happy.

Fall and winter are my favorite seasons! Foreign location: Someplace with castles.

And finally, list your preference from the following choices:

Cake or pie? Pie, but I wouldn’t say no to a slice of cake if it was vegan.

Halloween or Christmas? Halloween has an easier pace, and as I said earlier, I love the fall. So, I have to go with Halloween.

A mortal, vampire, ghost, or fae for a lover? I’m picturing my sweet husband as a vampire, holding his cape-draped arm in front of his nose and mouth, peering at me over his arm like Bela Lugosi. When I stop laughing, I’ll give you an answer.

I hear ya! Thanks so much for joining me today, Micki, and best of luck with your new release! Here’s the scoop on A Scandalous Request:

After fleeing the clutches of her vile brother-in-law, Rose Evans finds refuge in the home of her dear friend, Lord Ashton Sennett. They come to an agreement, a marriage of friendly convenience. Since another holds claim to Ashton’s heart and body, he seeks to see that Rose experiences all life has to offer. And so to Lord Darington, he makes a most scandalous request.

Burke Darington, Third Earl of Blackwood and an austere, solitary man, can scarce believe his ears. Apparently, his whispered reputation has earned him an outrageous solicitation–Lord Sennett wants him to seduce his wife. Though Burke finds Rose fascinating, sweet, intelligent, and with a unique bent toward independence, she is also innocent. She deserves better than to be fouled by a tainted man.

A seduction, a shooting, and an unexpected matter of the heart, throw two wounded souls into a sensational scandal. 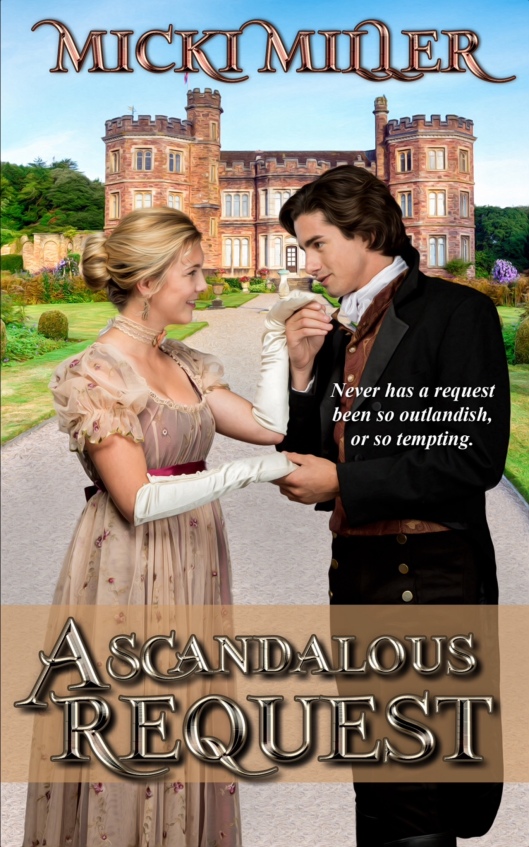