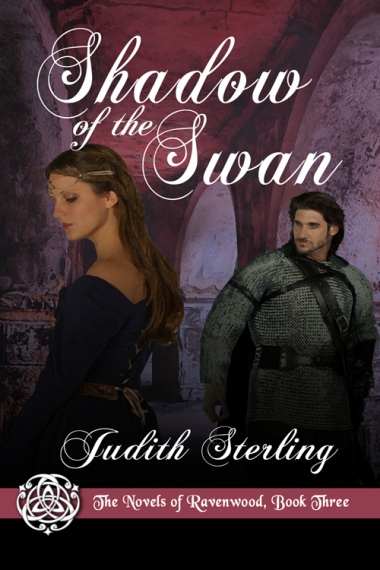 We’ve reached the end of the Author’s Choice round of Medieval Monday, and you know what that means!  I’m featuring the final installment of my own excerpt from Shadow of the Swan.  Today’s my birthday, but I’m offering you a gift.  Comment below for a chance to win an eBook copy of one of my books:  your choice!

So here’s your peek at Robert and Constance’s unconventional wedding night:

She stepped back. “What are you doing?”

“Undressing.” He set his belt on the table.

Her stomach dropped. “Why?”

“Aren’t you the suspicious one?” He pulled off his boots. “’Tis customary to doff one’s clothes at bedtime.”

She whirled around, turning her back on him. “I slept fully clothed at the nunnery.” She stared hard at the stone wall.

“I hate to state the obvious, but this isn’t a nunnery.”

Heat flooded her cheeks and forehead. “Is that necessary?”

“I could wear my breeches.”

“On one condition.” His tone was loaded with meaning beyond her grasp.

What condition? What does he want from me?

She turned to face him. Apart from his calf-length breeches, he was nude. Her gaze locked onto his chest.

Sculpted by combat. Scarred by war. Covered with black hair.

“Any objection?” His voice was soft, deep.

She forced her gaze to his eyes. They looked darker now. Was it a trick of the light?

He’s waiting for an answer. Say something! “No.”

“How did you undress so fast?”

“The battlefield teaches one to do everything fast.” His eyes sparkled. “Well, not everything.”

Did her heart still beat? She couldn’t tell. His tone was so suggestive.

Her hands flew to her cheeks. “And whose fault is that?”

He gave her a rueful smile. “Mine. But if we’re to be friends, I have to speak honestly.”

“About all matters. Can you live with that?”

She hesitated, then gave him a nod. “I can. And in that vein, what is the condition you proposed?”

“Right. If I’m to smother myself with added linen—”

He cocked an eyebrow. “So say you. But if I do that, you must sleep in your chemise only.”

Her jaw dropped. Then she frowned. “Why?”

“For the sake of comfort.”

He looked down, and his fingers seized the tie to his breeches. “Fine. If you’d rather I drop my—”

“Stop!” She grumbled. “Very well. I’ll sleep in my chemise.”

“Do you prefer one side of the bed to the other?”

She shrugged. “It matters not.”

“Then I lay claim to the left.”

As soon as the bed creaked beneath his weight, she removed her headdress. Then she disrobed as quickly as she could and scurried to the bed.

“Why such haste?” he asked as she slid beneath the covers.

“Mine are warm. You’re welcome to—”

And there you have it.  Here’s a little more info about Shadow of the Swan:

Thanks for spending time with me and my characters.  Hope to see you for the next round of Medieval Monday!