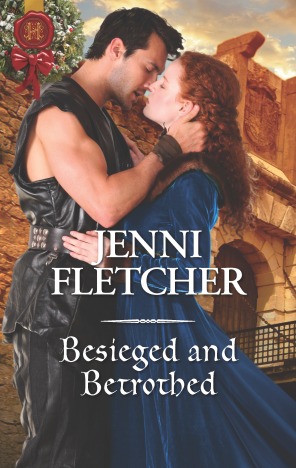 Welcome back to Medieval Monday! I’m pleased to have Jenni Fletcher with me today, and I’m featuring her romance, Besieged and Betrothed.

If you’re following my excerpt from Shadow of the Swan, you can find the eighth snippet of Robert and Constance’s unconventional wedding night on Jenni’s website: www.jennifletcher.com

He stiffened, taken aback by his own words. Why had he said that? He never said things like that! It had to be her proximity affecting him, recalling his dreams from the previous night. He was so close that he could smell the delicate honeysuckle scent of her hair, or was it her skin? He was tempted to bend closer to find out…

‘Surrender.’ He cleared his throat huskily. ‘Now, while you still can. No matter whose side you’re on, Matilda’s or Stephen’s, your father would have wanted you to be safe.’

Follow along next week on Sherry Ewing’s blog: https://sherryewing.com/blog/

A little more about Besieged and Betrothed:

Ruthless warrior Lothar the Frank has laid siege to Castle Haword, but there’s a fiery redhead in his way—and she’s not backing down!

More tomboy than trembling maiden, Lady Juliana Danville would rather die than lose the castle. When she’s caught on opposite sides of a war, a marriage bargain is brokered to bring peace. But is blissful married life possible when Juliana has a dangerous secret hidden within the castle walls?

See you next Monday!